Climbing Mountains: From Outward Bound Expeditions to the Highest Peaks of the Beer Industry 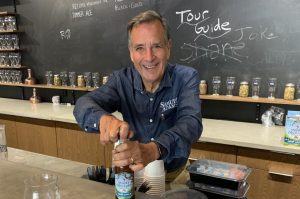 Jim Koch is one of the world’s most successful beer brewers, creating Sam Adams beer out of his kitchen in the early 1980s. He’s given hundreds of interviews, mostly about his product and his business, but until recently, had never been interviewed or told the story of his connection to the organization that gave him the confidence and leadership skills to pursue such a bold venture.

Born in Ohio, educated in Boston, Jim Koch found his way to Outward Bound in the early 1970s. Dropping out of Harvard as a graduate student, Jim moved out to Colorado to begin a 3-year stint as a student, assistant Instructor, and then full-Instructor at Outward Bound, moving from schools and base camps in Colorado, Minnesota, Texas, Oregon, and even into British Columbia.

He got his feet wet in the outdoors from a friend, Bruce, a former Outward Bound Instructor from Australia, who introduced Jim to outdoor activities including rock climbing, kayaking, and backpacking, giving him the skills, and the idea, to make the move from Harvard to Outward Bound.

Reflecting on his decision, Jim said:

“I loved the idea of Outward Bound, of teaching leadership in the wilderness. That was a time in my life where I had just dropped out of school, and was trying to sort out what I wanted to do. And Outward Bound helped me with that process, as it’s done with so many other people.”

Jim went on to guide courses of 28-days in length, helping students to learn and grow as people and leaders, and where he would experience this very learning and growth himself.

Reflecting on his learning at Outward Bound, Jim added:

“To me, being an Outward Bound Instructor is the best training you can get for leadership…I have no doubt I learned more about leadership at Outward Bound than I did during my time at Harvard Business School.”

Jim would go on to start Boston Beer in 1984, leaving behind a well-paying and stable job in consulting. A decision he credits to his time at Outward Bound.

“[Outward Bound] gave me the confidence to quit a high paying job, and start brewing beer in my kitchen. [It gave me] the belief that one way or another I would make this successful.”

And indeed Jim and Boston Beer have become successful, with the company surpassing $1 billion in sales in 2016, and receiving hundreds of awards, including Best Beer in America in 1985.

And he has done it in large part by infusing his business with Outward Bound values and ideals, such as developing self-confidence and positive self-image, two characteristics he sees as critical to success in business.

“If you can imbue that Outward Bound mentality in an organization, it gives you a secret weapon.”

As it relates to his business:

“[At Boston Beer], we’ve done the equivalent of a repel, walking off a cliff backwards, and ending up on solid ground. To me, that experience provides a kind of confidence that is a very important thing in an organization. The knowledge that we’ve overcome challenges before, and we can do so again.”

This is just one example of Jim taking lessons from his time at Outward Bound, and leveraging them to empower himself, and to empower others.

Outward Bound didn’t just provide Jim the confidence and leadership skills to start and grow a successful company. It provided him several ideas and ideals that he continues to apply and bring into his company today.

One example of this is a concept he calls string theory.

“The string theory is not some kind of complicated physics, it’s a lesson I learned at Outward Bound.”

On course, Jim noticed that when providing students alpine cord for things like setting up tarps and lashing gear to backpacks, by the end of a 28-day course, participants almost always didn’t have enough cord remaining. As an experiment, Jim decided to give his students less cord than they needed from the start. The result?

“By the end of the course, they had plenty,” Jim observed.

As it turned out, students had learned to preserve what they had, using resources sparingly and efficiently.  Even finding bit and pieces of cord that others had left behind tied to a tree.

The lesson Jim took away was:

“Culture and values can substitute for resources and money and equipment…and that is a great lesson to learn in business.” 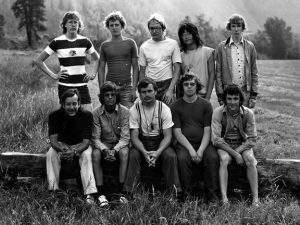 An Ethos of Service

Beyond business strategy, Outward Bound has also impacted Jim’s philosophy of service and giving back to the community.

For Jim, the goal was for students to realize that being strongest was not about, “How do I get there first,” rather, “How do I help others who need it.” To discover that by helping others, the group would get to its destination faster.

That mindset, to Jim, is the fundamental foundation for service. That those who have extra capacity, should use it to get others where they need to go.

Jim has applied this ethos of service to his work with an initiative he launched in 2008 called, Brewing the American Dream. The initiative builds on Boston Beer’s foundation as an entrepreneurial company by providing coaching, mentoring, and micro-finance to up-and-coming businesses and start-ups in the food and beverage space. To date, Brewing the American Dream has made more than $65 million in loans to thousands of businesses, with a repayment rate of 98%.

One of the most powerful elements of an Outward Bound program is the “solo” experience, a time during an Outward Bound course when students are alone for a period of time to rest and reflect. For Jim, he saw the experience was a way to cast aside the weight of other people’s expectations and to come to grips with his true self.

“It strips away so many things. You’re in the wilderness, you’re alone, you have only yourself to rely on, and only yourself for company. That’s a core skill for all of us today.”

When asked what he saw as the ongoing need for Outward Bound today, and his hopes for the organization in the future, Jim reflected:

“[I believe] Outward Bound is still relevant today because the skills and mindsets it promotes, like self-confidence, and enhanced self-image, are things we can all benefit from. And the wilderness is a wonderful petri dish to grow those in.”

When asked to reflect on Outward Bound’s accomplishments over 60 years, and what he hoped for Outward Bound’s work in the future, Jim summarized simply: “Congratulations, and keep it up!”

The above article is based on an interview with Jim that took place at the Sam Adams Brewery in Boston, Ma. in June 2022, along with quotes from his book, “Quench Your Own Thirst.”