Video: Did This Buck Have a Seizure at a Scrape? 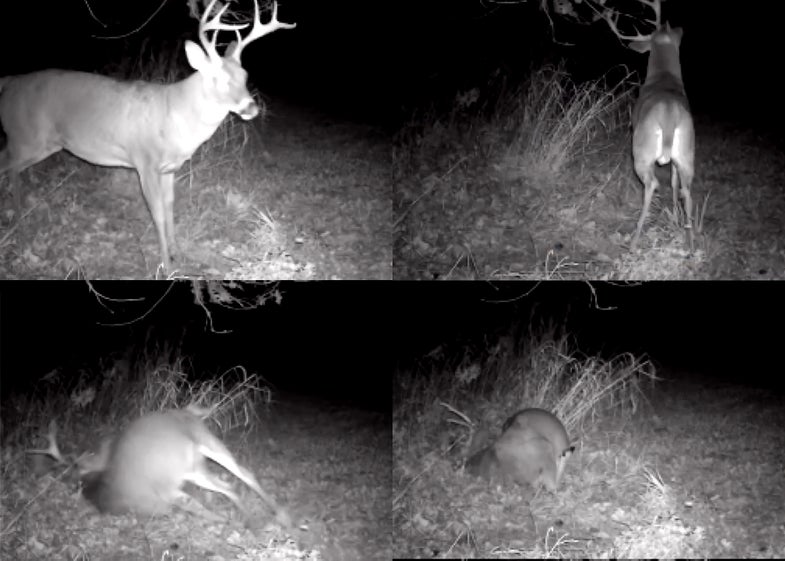 Trail camera footage shows a buck working a scrape before falling down and having what appears to be a seizure. courtesy of Growing Deer TV

A video that was shared to Instagram earlier this month by Growing Deer TV shows trail camera footage of a buck working a scrape at an undisclosed location. While lifting its head to work an overhanging limb, the buck suddenly hits the ground and has what appears to be a seizure. At least that’s the theory held by Grant Woods, a well-respected whitetail biologist, habitat manager, and the host of Growing Deer TV.

Woods says that a viewer named John Gibbs sent him the trail camera footage and asked for his opinion. The video does not have a timestamp, and Gibbs chose not to share the location where it was recorded.

Moving down the list of possible causes, Woods explains that seizures are not a symptom of chronic wasting disease (CWD) or Epizootic Hemorrhagic Disease (EHD). He doesn’t think the seizure was caused by something the buck ate, either, as it’s likely that other deer in the area would have had a similar reaction and Gibbs hasn’t seen any proof of this.

Read Next: Grant Woods Just Sold the “Proving Grounds.” Here’s What He Learned from Building One of the Most Famous Whitetail Properties in America

Gibbs has, however, recorded additional footage of the buck since the seizure video was shared on Nov. 1. The buck returns to the scrape and acts completely normal in the later videos. But when he and Woods took a closer look, they noticed that the deer was missing an eye. It’s hard to say for sure if the deer lost the eye before the seizure video was recorded, since that video only shows the buck’s right side. But if this was indeed the case, Woods thinks it might offer a more complete explanation for the seizure.

“I assume—and this is a total assumption—that he got in a fight [with another buck] and somehow got his eye knocked out,” Woods says. “And there was probably some neurological damage with that injury. We’re just piecing it together here and I need to make that clear, but I think it’s a pretty logical conclusion.”